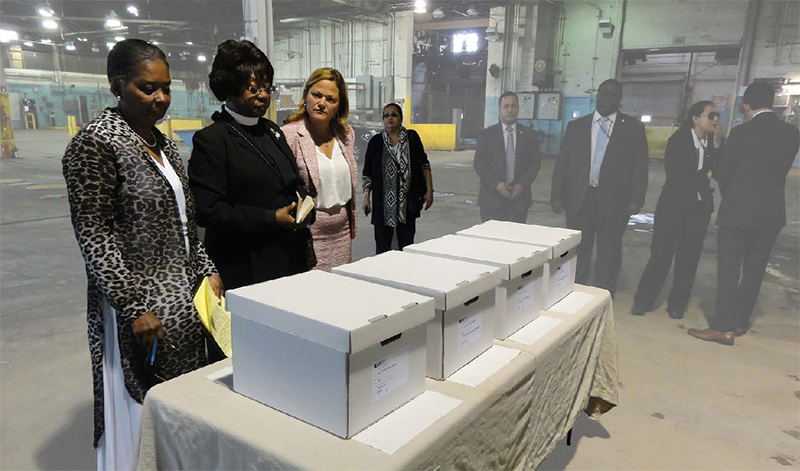 History of the Site

The Harlem African Burial Ground was in use from the late 1660s through at least 1956. Once situated within the Dutch village of Nieuw Haarlem, the site has experienced considerable disturbance over the last 150 years. As a result, the burial ground was displaced and disregarded, and its history was all but forgotten.

Evidence of the African Burial Ground was discovered in the early 2000s during a documentary study of the site for the MTA. In 2015, the City commissioned an archaeological assessment that determined that the original burial ground had been displaced from the site in the 19th century. As part of the study, portions of human remains were uncovered outside the historical boundaries of the burial ground, providing further evidence of the cemetery’s displacement. These remains were carefully removed and are preserved in temperature-controlled storage so that they may be reinterred at the future memorial.

Before any development, additional archaeological evaluations will take place under the supervision of State and City historic preservation agencies and the Harlem African Burial Ground Task Force to ensure that all remains of the site are preserved.

The 126th Street African Burial Ground Memorial and Mixed-Use Project is a unique initiative to recover and preserve an essential piece of Harlem and New York City history and repurpose public land for community benefit. The project is in East Harlem on the site of a former MTA bus depot that includes an area that was once the site of an African burial ground dating back to the 17th century.

Creating a new Harlem African Burial Ground memorial and cultural center to acknowledge the historical significance of the site is at the heart of the project and the focal point of the development. To achieve the goal, the City is collaborating with the Harlem African Burial Ground Task Force., co-chaired by City Council Speaker Melissa Mark-Viverito and the Reverend Dr. Patricia A. Singletary, Pastor of Elmendorf Reformed Church, the descendant church of the Low Dutch Reformed Church that established the burial ground almost four centuries ago.

The city block-sized site also offers the opportunity to reconnect the site with the surrounding community and address the pressing needs of East Harlem, including affordable housing, jobs, retail, and public open space.

Looking to the Future

The City is in the planning stages of transforming the bus depot site into an outdoor memorial on the historical footprint of the former burial ground, alongside affordable housing and commercial and community facility space. The site must be rezoned and receive other land use approvals through the Uniform Land Use Review Procedure (ULURP), a public process starting in February 2017 that lasts approximately seven months and includes review by Community Board 11, the Manhattan Borough President, and the City Council.

Once ULURP has concluded, community input and goals will inform a Request for Proposals (RFP) to seek development bids through a competitive process. Throughout, the City will work with the Harlem African Burial Ground Task Force and community to ensure that the project honors the history of the burial ground and meets the needs of East Harlem residents.

Stay up-to-date on project news and events at edc.nyc/east126thproject