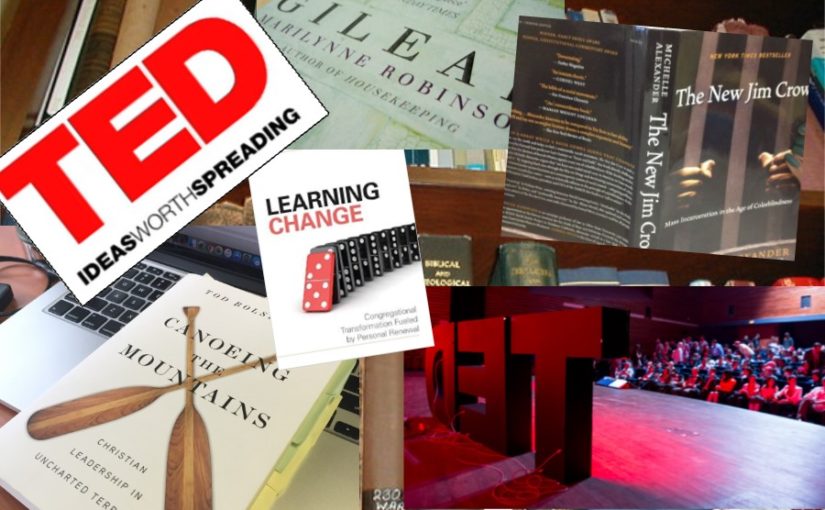 Frequently in the “Your RSNY” email, there is a recommendation for a book, video, or article. This page includes all of the past recommendations.

Take some time to read Christine Pohl’s “Living Into Community: Cultivating Practices That Sustain Us.” Every church has experienced them: betrayal, deception, grumbling, envy, exclusion. They make life together difficult and prevent congregations from developing the skills, virtues, and practices they need to nurture sturdy, life-giving communities. This book explores four specific Christian practices — gratitude, promise-keeping, truth-telling, and hospitality — that can counteract those destructive forces and help churches and individuals build and sustain vibrant communities.

As we expect more from technology, do we expect less from each other? Sherry Turkle studies how our devices and online personas are redefining connection and communication — and asks us to think deeply about new kinds of connection we want to have. Watch the TED Talk: ‘Connected, but alone?‘

Read the book “White Fragility: Why It’s So Hard for White People to Talk About Racism” by Robin DiAngelo. It’s excellent and helpful in this time when we must talk about race and justice. DiAngelo helps us to understand racism as a practice not restricted to ‘bad people’. Referring to the defensive moves that white people make when challenged racially, white fragility is characterized by emotions such as anger, fear, and guilt, and by behaviors including argumentation and silence. These behaviors function to reinstate white racial equilibrium and prevent any meaningful cross-racial dialogue.

Book: “Not in God’s Name” by Rabbi Jonathan Sacks addresses religious extremism and violence committed in the name of God. Through exploration of the roots of violence and its relationship to religion, and groundbreaking biblical analysis, Rabbi Sacks shows religiously inspired violence has as its source misreadings of biblical texts at the heart of all Abrahamic faiths. This fantastic book gives insight into why there is so much violence and what the Bible has to say about it.

Article: A Christian program called New City Kids uses tutoring, music, leadership training and spiritual formation to help children in three cities transform their lives. It has been remarkably successful: 100 percent of its graduating seniors have gone to college. Take a moment to read “Measurement, documentation, reflection and adjustment are hallmarks of an after-school program“.

TED Talk: In ‘What it’s like to be the child of immigrants,’ Michael Rain talks about first-generation immigrants, with strong ties to the countries they live in and their countries of origin. He shares immigrants’ limited narratives and mischaracterizations and the stories of the worlds they belong to.

TED Talk: Take a few minutes and listen to Drew Dudley’s TED Talk on The Leadership Game – creating cultures of leadership. The things we are driven to do every day are the things that make us feel good. Dudley believes that if we find a way to make leadership into something that brings people positive feelings, more people will make it a fundamental part of their life.

Article: Steven Argue touches on basic steps to take in ministering to emerging adults in your church. Read “It’s Time to Define the Relationship with our Emerging Adults.”

Article: Rather than teaching teenagers about salvation and “the right answers,” in this article, Steve Argue details some steps his student ministry staff completed over one year to capture teens’ imaginations and show them how to live a life that features an active relationship with Jesus.

Article: In “From Faith to Faithing” Steven Argue explores how religion should not be a stagnant noun, but a growing, adaptable verb which allows for a faith that reaches beyond inflated successes and into a person’s reality. Read this article by Steven Argue.

Article: Read this article by Steven Argue where he looks at the movement of spirituality and questions: “In the name of order or program, might we unknowingly be teaching a motionless spirituality?”

Article: Check out Steve Argue’s article “Beyond the Conference: 4 Questions to Transform Your Ministry Training Approach.” Learn how to make the most of your conference and training opportunities and implement what you learn back at your congregation.

Book: Read The Coaching Habit: Say Less, Ask More & Change the Way You Lead Forever by Michael Bungay Stanier. This book will show you how to make coaching a regular, informal part of your day so you and your leadership can have a bigger impact without working so hard.

Book: Need some summer fiction? City of Tranquil Light is the story of two young missionaries in China. Will Kiehn is seemingly destined for life as a humble farmer in the Midwest when, having felt a call from God, he travels to the vast North China Plain in the early twentieth-century. There he is surprised by love and weds a strong and determined fellow missionary, Katherine. They soon find themselves witnesses to the crumbling of a more than two-thousand-year-old dynasty that plunges the country into decades of civil war.

Book: Jim Herrington, the retreat leader and keynote speaker for this year’s Annual Meeting, is releasing a new book this month. Check out Learning Change: Congregational Transformation Fueled by Personal Renewal. In this book, Herrington and Trisha Taylor introduce a model for personal and congregational transformation.

Book: The Fifth Discipline: The Art and Practice of the Learning Organization describes Peter Senge’s theory of “systems thinking”. Senge explains how to turn companies into learning organizations, detailing how the only sustainable advantage over competition is to learn faster.

Book: Take some time to read The Leader’s Journey: Accepting the Call to Personal and Congregational Transformation by Annual Meeting speaker Jim Herrington and R. Robert Creech and Trisha Taylor. The book provides a plan and steps for engaging the personal transformation journey as part of effective congregational leadership.

Book: Read Start with Why: How Great Leaders Inspire Everyone to Take Action by Simon Sinek. This book explains how people won’t buy into something until they understand the “Why?” behind it.

Ted Talk: Philosopher Stephen Cave presents an interesting take on our fear of death and how we cope with that in this Ted Talk: “The 4 stories we tell ourselves about death.”

Book: Hinds Feet on High Places by Hannah Hurnard is a beautiful  allegory describing the journey of Christian faith.

TED Talk: In this talk, Michele L. Sullivan tells us that “None of us are what you can see” and that “The only shoes you truly can walk in are your own.” Take a few minutes to watch this witty talk: “Asking for help is a strength, not a weakness.”

Book Recommendation: Take some time to read’s Marilynne Robinson’s 2004 Pulitzer Prize winning “Gilead: A Novel.” The novel is a letter from Rev. John Ames, 76, to his 6-year-old son. John reflects on his life, family, love, friendship, and faith in a letter he hopes his son will read long after John’s dead, when his son is grown.

Book: Take some time to read this book: The Leader’s Journey: Accepting the Call to Personal and Congregational Transformation. The book is by Jim Herrington, R. Robert Creech, and Trisha Taylor. Herrington is slated to be the keynote speaker at this year’s Annual Meeting and lead a pre-Annual Meeting clergy retreat.

TED Talk: Take a few minutes to watch this short talk on “How jails extort the poor.” Today, hundreds of thousands of people are in jail only because they can’t afford bail or their debt to court, sometimes as minor as unpaid parking tickets.

Book: Pick up a copy of Malcolm Gladwell’s David and Goliath: Underdogs, Misfits, and the Art of Battling Giants. This book looks at the David’s improbable victory and challenges how we think about disadvantages, making readers think about disability, discrimination, losing a parent, and any other obstacles in a new way.

TED Talk: Take some time to watch “We Need to Talk About an Injustice.” Human rights lawyer Bryan Stevenson shares some hard truths about America’s justice system, starting with a massive imbalance along racial lines: a third of the country’s black male population has been incarcerated at some point in their lives.

TED Talk: Watch this talk on “5 Ways to Listen Better.” Sound expert Julian Treasure says that today’s louder society is making us worse at conscious listening. Listen to the talk for tools and exercises you can use to improve your listening.

Book: Our book for this week is: The New Jim Crow: Mass Incarceration in the Age of Colorblindness, by Michelle Alexander. Alexander addresses racial inequality in today’s prison system. There are more African Americans under control of correctional facilities today than were slaves in 1850.

Book: Leadership on the Line: Staying Alive Through the Dangers of Leading by Ronald Heifetz and Marty Linsky: To lead is to live dangerously. It’s romantic and exciting to think of leadership as all inspiration, decisive action, and rich rewards, but leading requires taking risks that can jeopardize your career and your personal life. It requires putting yourself on the line, disturbing the status quo, and surfacing hidden conflict.

TED talk: This talk by clinical psychologist Meg Jay addresses “Why 30 is not the new 20” and how twenty-somethings can re-claim adulthood in the defining decade of their lives.

TED talk: At a moment when the world seems to be spinning out of control, religion might feel irrelevant – or like part of the problem. But Rabbi Sharon Brous believes we can reinvent religion to meet the needs of modern life. In this impassioned talk, Brous shares four principles of a revitalized religious practice and offers faith of all kinds as a hopeful counter-narrative to the numbing realities of violence.

TED talk: “Say your truths and seek them in others.” Click here to see.

TED talk: Here’s a valuable TED Talk by Zak Ebrahim. “I am the son of a terrorist. Here’s how I chose peace.”

Book: Geraldine Brooks writes beautiful historical novels and The Secret Chord is no exception. This is the story of David told from the perspective of Nathan, his prophet. Truly a wonderful read.

Article: Take a moment to read this recommended article from Reformed Worship, “Joy: The Missing Ingredient.”

Ted Talk: Now more than ever, it’s important to look boldly at the reality of race and gender bias – and understand how the two can combine to create even more harm. Kimberlé Crenshaw uses the term “intersectionality” to describe this phenomenon; as she says, if you’re standing in the path of multiple forms of exclusion, you’re likely to get hit by both. In this moving talk, she calls on us to bear witness to this reality and speak up for victims of prejudice.

Ted Talk: This TEDTalk deconstructs the meaning of compassion through several moving stories, and proposes a new, more attainable definition for the word.

This is a talk by Patrick Lencioni, author of The Five Dysfunctions of a Team. In this funny, genuine talk, Mr. Lencioni shares the 5 things that keep  teams from functioning at their best. Well worth the time.

Watch this TED Talk from the RSNY Police-Community Relations Summit in August. Listen to Baltimore Police officer Lt. Colonel Melvin Russell explain how, as district commander, he worked to create community and lower crime from its roots.

Put Canoeing the Mountains: Christian Leadership in Uncharted Territory by Tod Bolsinger on your reading list. The Executive Officers of the Synod are reading this book. The content will be the backdrop for our keynote speaker at next year’s annual meeting.