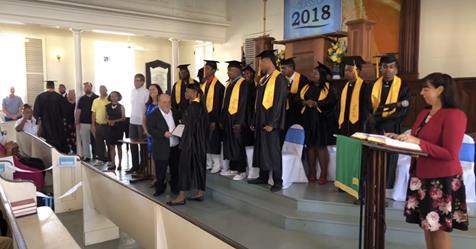 Eighteen young men and women on Sunday graduated with an accredited high school diploma through the My Brother’s Workshop (M.B.W.) Career and Technical School at the historical St. Thomas Reformed Church (S.T.R.C.) with both a baccalaureate and graduation service, a release M.B.W. issued Tuesday has made known.

M.B.W., founded by Scott Bradley in 2007 on the front steps of the S.T.R.C. church, works towards ending youth crime and violence in the territory through mentoring, counseling, education, on-the-job training and job placement, according to the release.

Pastor of S.T.R.C. and M.B.W. board member, Jeff Neevel, conducted the baccalaureate service with M.B.W. graduate liturgists, Jashawn Bailey and Tumari Williams, the Rising Stars Youth Steel Orchestra and soloist Penny Woods, according to the release.

As “Pomp and Circumstance” echoed through the sanctuary on steel pans, M.B.W. graduates took their seats. Mr. Bradley, who also serves as program director, addressed the new graduates and a crowd of over 200 family, friends, supporters and others. Also addressing the crowd were Executive Director Jenny Hawkes, Educational Manager Suzanne Magras, Assistant Program Director Nakeba Stewart and Mr. Neevel.

The guest speaker, Julian “The Hawk” Jackson, former professional boxer and three-time world champion, reminded graduates to put God first, to not fear failure and to take risks. Mr. Jackson shared his experiences of growing up in the Virgin Islands and being told that he would never make it, given the perceived lack of resources and opportunities in the territory. He encouraged graduates to believe in their dreams, despite others’ limiting beliefs.

Remarks were offered by graduates Tumari Williams and Ki-Janna Parker, who thanked everyone for supporting the graduates during the journey, according to the release. A video produced by M.B.W. showing how far each student has come was also shown.

Graduates who received a GPA of 3.4 were honored during the ceremony and received their honor cords. S.T.R.C. also honored one particular graduate, Jamoi Mulraine, who showed outstanding character and exemplary community service, with a “Love Your Neighbor Award”. Huge smiles and continuous roar of applause, along with the recessional by Rising Stars ended the ceremony, with a reception, hosted by the M.B.W. Café and Bakery after the service.